The importance of office acoustics

You may not have ever considered the quality of your office acoustics. Or thought about how, or even why they should be kept under control. But fear not, this guide will take you through everything you need to know.

The use of acoustic treatment has migrated from professional music environments to office workspaces of businesses totally unrelated to sound production. This reason is that video conference rooms and other office spaces which are less noisy and less stressful have a positive effect on productivity and profitability.

With some stunning design options now available, it can also help to create a stylish and more modern workplace, or simply fix that annoying echo in a video conference room.

Following the pandemic, UK employees are the most reluctant to return to the office compared to those across Europe, so creating a workplace which is as stress free as possible is more important than ever. 85% of UK working adults currently homeworking want to adopt a “hybrid” approach of both home and office working in future so when they do come into the office you’ll want it to be an inspiring place which engenders motivation and productivity.

It’s conceivable that in the near future, the quality of office spaces offered by a business could become one of the top priorities for those choosing their next employer. It could also therefore improve retention of existing employees.

What is office acoustic treatment?

It is the science behind alleviating reverberation or echo in the workplace. Sound waves can reflect off hard surfaces such as walls and wooden floors, resulting in some frequencies being cancelled out while others sum together. The clarity of spoken words in a video conference becomes greatly reduced for those in the room and the problem is compounded for those joining online.

It works by absorbing or diffusing sound waves to bring the reverberation time to a neutral and pleasing amount, around 0.5s – 1s. In case you were wondering, you wouldn’t want to reduce reverberation to zero because quiet moments in an anechoic chamber feel incredibly unnatural, where you become the sound source, hearing your heartbeat, or the air in your lungs. An effect which probably isn’t conducive to conventional forms of work.

As many transition back into the office after an extended period of working from home, the importance of a comfortable workplace is key. Many studies have shown that a comfortable working environment can positively affect productivity. Office noise ranks highly on the list of complaints from workers and, according to the WHO, there is strong evidence that noise is one of the top environmental hazards to both physical and mental health.

Taking control of your office acoustics helps to reduce noise which can be a game changer for the workplace. 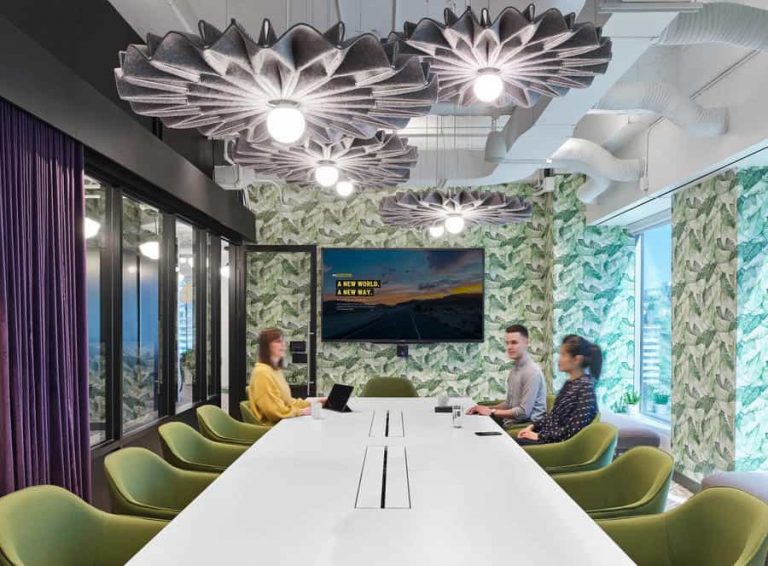 What is the difference between soundproofing and acoustic treatment?

Soundproofing is the principle of blocking sound waves from entering or leaving a space. Acoustic treatment, on the other hand, is based on controlling echo and reverberation to manageable levels. Soundproofing requires heavy duty building materials and requires sealing all gaps such as those found around doors and windows.

There are occasions where a soundproof booth is ideal for privacy in an open office environment but, in general, acoustically treating each space with a variety of absorptive elements is the ideal solution for an office and its conference rooms.

To fully appreciate the benefits of acoustic treatment it’s helpful to gain an understanding of the concepts involved.

What is the definition of sound?

It can be defined as the brain’s perception of the signal transmitted by the hearing organs when they receive vibrations travelling through the air. Sound is a pressure wave which travels in all directions and can be considered as a form of energy.

The size and shape of spaces and the materials used within them affect the way sound waves travel. There are areas in an office, such as a video conference room, where it’s beneficial to control the transmission of sound waves to prevent echo and make sure everyone can hear, and be heard, clearly.

The number of times the sound wave repeats itself in one second is called frequency, measured in Hertz (Hz). Frequency is effectively pitch, so a high frequency wave will be heard as a high pitch sound, and a low frequency wave a low pitch sound. In an office environment sound sources fall into different frequency ranges, for example:

High frequency sounds have the capacity to be the most disturbing since they are more greatly reflected than low frequency sounds. To control the full range where speech occurs, frequencies of between 100 – 4000 Hz should be targeted.

Of course, sounds don’t just vary in pitch, but in volume. Volume of sound is measured in Decibels (dB). Two sounds can have the same pitch but different volumes, such as a siren (120dB, 1800Hz) and a dog bark (85dB, 1000 – 2000 Hz). Sounds with higher decibel levels require a greater level of control as they present a more significant source of stress.

The sound level of speech is about 60 decibels which is roughly the volume level an office environment should be limited to so as not to be distracting. Office environments can experience decibel levels up to 85dB – sounds above this level are considered to be harmful.

Reverberation is when a sound wave reflects off a surface, the reflections build up, and then decay.

Acoustics, from the Greek akoustos, meaning “heard”, is the term used to describe how the properties of a particular space affect how sound waves travel. Acoustics are affected by three primary methods.

Office acoustic treatments use a combination of the above principles to control reverberation.

When did acoustic treatment start?

Well, it wasn’t in the office. Civilisation began to account for the effects of reverberation with religious songs performed in churches. Reverb time in such environments can range from 2 to 13 seconds. Songs were composed to manage this using lyrics with syllables drawn out over multiple notes to ensure they were audible, and not blended with previous sounds still reflecting around the space.

Amazingly, it was thousands of years ago that architects began designing spaces with a view to improving acoustics. The amphitheatre of Epidaurus built in 340 BC has been widely studied for its near perfect intelligibility of spoken words, as well as absorbing sounds from the audience. It was here that the principles and science of architectural acoustics were founded.

Eventually methods of acoustically treating existing spaces within buildings began to be devised. After all, not all buildings were designed with acoustics in mind, and sometimes their use deviated from that originally intended.

In 1890 a Harvard physicist named Wallace Clement Sabine founded the science of architectural acoustics when he sought to improve the excessive reverberation of Harvard’s Fogg Art Musuem. After trying various seating cushions he began to experiment with different sound absorbing materials which fed into his design of the Boston Symphony Hall, admired for its acoustic quality.

Today, measuring reverberation time is the starting point of acoustically treating a space and Sabine was the first to do this. He even has a unit of sound-absorbing power named after him, the sabin.

Which materials are used in office acoustic treatment?

In recording studios of the 1970s, thick fibre glass was used to absorb sound. The results were very effective, even at very low frequencies, but early forms of the material allowed glass spicules to escape during installation which created a major health hazard if inhaled.

Current materials are safe for those installing them as well as the environment. Being composed from recycled or recyclable materials, office acoustic treatment materials can range from bulky, foam acoustic panels incorporating recycled wool, to thin PET felt wall coverings made from 100% upcycled plastic bottle waste.

Acoustic treatment can take many forms including wall panels, lighting solutions, floor standing elements, ceiling hung baffles and even planters. Unfortunately egg cartons aren’t going to cut it – they’ll do about as much to inspire creativity as they will absorb sound.

Every area in an office will have different sound absorption and reflective properties so needs to be treated individually.

Open plan offices have been a popular choice for many years as they maximise the space and can be quickly adapted depending on current business requirements. The downside is increased noise levels and distractions but there are still many options available to help acoustically treat the environment. For example, incorporate sound absorbing options into the various elements which exist in an open plan office such as ceiling lighting, a hanging grid, desk dividers and curtains. Or add acoustic wall panels and strategically positioned baffles or screens at the sources of noise.

Alternatively, meeting rooms might benefit more from additional furniture and decor such as corner pillars and absorptive planters, as well as acoustic panels on the walls and ceiling.

A noticeable difference between acoustic treatment in offices and sound production environments is that it doesn’t have to just serve a purpose, it can enhance the characteristics of the workplace too. The acoustic treatment elements we install are often as eye-catching as a piece of art.

There are also existing medical conditions to note. One such condition (which you might not even know you have) results in having difficulty hearing individual voices in a noisy room, and treating the room acoustically could be beneficial.

Another condition, noise sensitivity, is the term for an individual who experiences an increased reactivity to noise. Studies have shown a complex relationship between noise sensitivity and personality and thus workplaces may need to consider a variety of spaces with differing acoustic properties to provide a pleasurable environment for all employees.

Digital Vision can help you decide the best office acoustic treatment solution for you. Get in touch for a friendly chat!